My Kid Came Home with a Super Bug 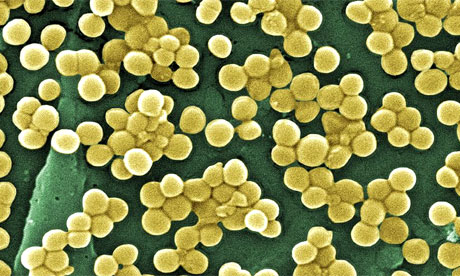 I just read a terrifying article in this month’sVogue,about how “super bugs”– antibiotic resistant bacteria–have become much more common. Last week I heard Terri Gross talk with David Hoffman about his Frontline show on the same topic. It’s called, “Hunting the Nightmare Bacteria.” All scary. Just in time for Halloween!

I know something about “super bugs.”

My son came home with an antibiotic resistant infection last July. It was a fairly gross looking, puss-filled infection that had started from a scrape on his knee. Since he had a low fever and it was very red and pussy, we were instructed to dab it with alcohol, use a warm compress and cover it completely. The bacteria was cultured for MRSA.

You can imagine my reaction: MRSA? From a scratch?! Isn’t that, like, flesh-eating?

While the sheets were soaking in bleach, I called several pediatricians (a perk of working with them); did the requisite online research and emailed my fancy microbiologist friend at Columbia University. I was initially prepared to ditch my dirt-loving ways (we have always encouraged a grungy, immune-boosting lifestyle for our kids) and embrace more antibacterial products. But the more I learned about MRSA, the more I appreciated living in peace with bacteria.  It may seem counter-intuitive, but my brush with a super bug made me an even stronger warrior for a dirty world.

By the time we got the positive test results back– about 2 days later– the MRSA infection had almost entirely drained and was on its way out. It was still pretty gnarly, but much smaller. A month later, it came back but on the other knee (a new cut). We cleaned, covered and compressed. It went away. It was not one of the horror stories you’ll read inVogue or see on Frontline. Yes, those horror stories are real and becoming more common, but I learned that infections– even antibiotic resistant ones– do not guarantee drastic consequences.

I practice more caution than I used to when anyone in my family gets a cut. I used to run water over a graze, now I carry alcohol swabs and a variety pack of BandAids with me at all times. Mostly, we just use plain old soap and water– as per instructed– and try to wash hands frequently.

But here’s the thing that I find scarier than the infection, which for us, was thankfully mild: The reason we’re seeing more of these super bugs in kids or “non-vulnerable populations” is directly connected to the misuse and overuse of antibiotics.

According to Hoffman, the “single most important factor” in the spread of antibiotic-resistent bacteria is the overuse of antibiotics. Antibiotics are often poorly prescribed by doctors and clinicians. As many as 50% are inappropriately given. Like, for example, when there is a virus. Misuse of antibiotics causes bacteria to adapt so they can survive. One of the “super bugs” featured on Frontline has the ability to teach other nasty bacteria how to resist antibiotics.

I teach childbirth classes and the research emerging about the benefits of diverse bacteria are remarkable. The bacteria babies are exposed to during birth are perfectly designed to colonize the gut. There are specific sugars in breastmilk that encourage a particular kind of bacteria growth, which is what we want for good health. We have to stop thinking of bacteria as bad. I now look at the claim, “kills 99.9% of all bacteria,” not as a solution, but as a part of the problem. (My Columbia microbiologist friend says the 99.9% claim is BS anyway.)

Listen to the NPR story here.

And read Dr. Cohen’s advice on treating infections or cuts and viruses in children.