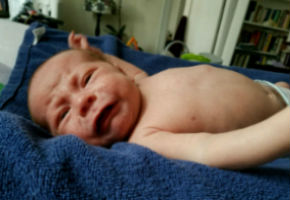 The New York Times recently ran an interesting article outlining the pros and cons of circumcision in kids. Below are a few excerpts from The New Basics on the topic:

From a medical standpoint there are no good scientific reasons for circumcision. As much as it may prevent certain sexually transmitted diseases and penile cancer, these conditions are too rare to justify routine surgery. Religious, cultural, or personal reasons, on the other hand, may compel you to do so. But if you’re going to trim your son’s foreskin, just be clear about your reasons.

You may want Jimmy circumcised so he’ll look like everyone else in the locker room. But these days, about a half of all boys are uncircumcised. You may not want him to look different from his father. This, too, seems specious; it wouldn’t take long to explain to him why you decided to spare him foreskin-removal surgery. If he decided at some point that he really wanted to look like his daddy, he could always elect to have the procedure done at that point.

In the end, much of the fuss over circumcision seems like mountains out of molehills; both options have been practiced for tens of thousands of years. Whatever decision you make will be the right one.

Penises are pretty much maintenance free, whether circumcised or uncircumcised. Doctors used to recommend pulling and retracting the foreskin to clean the penis and detach the skin. This is both painful and unnecessary; the white stuff that accumulates under the foreskin is not dirt but rather a coating substance with the lovely name of smegma. Since smegma is a natural secretion from the skin of the penis, there is no reason to remove it. Even if you did, more would appear. Just clean Jimmy’s penis as you would clean his foot or hand: use plenty of water. Aggressive cleaning or retracting, of course, will create redness or irritation.

It may surprise you to learn that circumcision is not an all-or- nothing affair. The amount of skin that gets cut varies. Sometimes the foreskin still covers the head of the penis and it looks like nothing was done. Other times, there’s more skin left on one side than the other. This occurs because it’s not easy for the person performing the procedure to control the exact amount of skin snipped, and he or she is wary of cutting it too close. Not to worry. Many years later, after the penis has grown and the extra skin has evened out, it will look just like you think a circumcised penis should.

Unfortunately not everyone thinks that. Some doctors still recommend and perform circumcision revisions when boys are older to even out the foreskin. This procedure, which requires general anesthesia, is from my experience totally unnecessary.