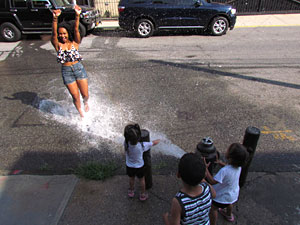 You’re a responsible parent, and as such, you’ve done your due diligence, researching conditions, infections, and all the many hazards that can potentially affect your tiny offspring. You’re not alone, and you’re especially not alone in wanting to control what your child comes in to contact with as much as possible to keep illness at bay. But, as Dr. Mindy Gallagher, long time pediatrician asserts, this may actually inhibit your little one’s developing immune system.

Let Them Eat Dirt
Okay, that might be a bit of a hyperbole, but not by much. Dr. Gallagher, who earned her medical degree at the New York College of Osteopathic Medicine and completed her residency at Westchester Medical, has always been impressed by how our bodies keep us healthy. “A normally functioning immune system is very smart and efficient. It can deal with a lot of insults.” And she would know. Before working for Tribeca Pediatrics’ she was a hospitalist in the pediatric emergency room.

“A baby or child’s environment should never be too sterile,” Gallagher states, “There’s evidence to support the notion that the emergence of all these new allergies is because parents are keeping their children’s surroundings too clean.” This, in turn, keeps the immune system from developing properly.

So, how does the immune system develop? Well, much like your brain, actually. When your body, or your little one’s for our purposes, encounters something new, the immune system creates a memory in the form of cells. And just like when your child gets a new puzzle that they learn to solve over time, so do their bodies with new environmental stimuli, and gradually they learn to fight infection.

For this reason it is necessary for parents to let kids be kids. Will you be grossed out when they shove a handful a dog hair into their mouth? Yes, we can’t prevent that. Will you squirm when their pacifier tumbles to the ground and they pop it right back in their mouths? Undoubtedly. But know, while you are manually removing public sandbox sand from their orifices, the fact that you let them get in there in the first place will help them in the long run.

To Cleanse or Not to Cleanse
Allowing your child to roll in the mud does not mean that you shouldn’t clean them up afterwards. “A great way to protect your child is hand washing.” Says Gallagher, “Even if everyone washed their hands, there would still be infections, but much of what we’re exposed to is on our hands, so washing them still the best way to keep your kids safe.” Hand sanitizer is also a good thing to have on hand, but it has its limitations. “If you’ve just come off the subway and your child is about to eat, this is a great time to use hand sanitizer.” Gallagher states. “But if their hands are visibly dirty, it’s best to wash them.”

And how about those baby bottles you’ve spent tireless hours sterilizing between uses? Well, according to Dr. Gallagher, it’s totally unnecessary in places with clean tap water, like New York City. “I’ve never seen the benefit of it. I just tell parents to use warm water, some soap and a bottle brush.”

When it comes to which cleaner you use for your house, you don’t have to go all natural, but Gallagher does warn against overusing antibacterial. “They can select out resistant bacteria,” she states, “which can increase the amount of aggressive bacteria in the home and cause infections that are hard to treat.”

And speaking of the home, for those living in older houses or apartments, particularly those undergoing renovation, there is a chance of lead exposure. Gallagher cautions parents, if you even think there might be a chance that your child has been exposed to lead, it’s worth bringing them in for a test.

Boosting Immunity
There are also a few things parents can do, in addition to letting their children dig in the dirt, that can strengthen the immune system. One of these is breastfeeding. “Breastfeeding has been proven to reduce the occurrence of ear infections and asthma.” Says Dr. Gallagher, “It’s not 100%, but it definitely offers protective antibodies.” Breastfeeding also improves digestive function in infants, general host defense and psychological well-being, which can bring long-term benefits.

Vaccinations, however controversial, are another proven way to boost the immune system. They are particularly helpful to infants, whose systems are not prepared to react to certain types of infections on their own.

A balanced diet, important for health in general, is also particularly important for boosting immunity. If you happen to have a ruthlessly picky eater on your hands, children’s vitamins are a safe supplement.

Your Kids Will Get Sick No Matter What
And therein lies the rub, dear parents. No matter what you do, your kids will get sick, and probably quite frequently in the first five years when the immune system is developing. It may be uncomfortable for your little ones, but get this: they’re supposed to.

“Literature speaks to the fact that children are just designed to have airway inflammations.” Says Dr. Gallagher, speaking of classic colds, coughs, and runny noses. “And eventually they just mature their way out of it. It can be frustrating for parents, but that’s what the body is supposed to do.”

In closing, though it may be hard not to scream when your kid leaves the playground covered in city grime, or stumbles into a particularly sketchy street puddle, as long as you employ regular hygiene practices, it’s not bad for them. A healthy immune system that has been allowed exposure to the elements will be well equipped for the challenge of life.