Having the #MeToo Conversation With Your Children 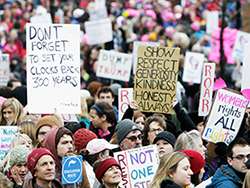 In light of the news coverage and dialog surrounding sexual misconduct and the #Metoo movement, we’ve asked our contributing writer, Olivia Briggs, to research and share some perspectives on having a conversation with your kids on the topic. For children and teens, who are just beginning to navigate these treacherous waters themselves, the recent stories in the news are as inspiring as they are frightening. Because of this, parents have a unique opportunity to seize this teachable moment and keep the movement progressing in the right direction.

1. Subvert Gender Stereotypes – This one is pretty simple, but very effective, according to Dr. Emily Kane, sociologist and author of “The Gender Trap: Parents and the Pitfalls of Raising Boys and Girls”. The idea that boys are tough and play with cars, and that girls are demure and like to play dress up, becomes a defining factor in how children grow up, behave, and see their world. More so than ever, not just for the sake of the #MeToo movement, but for the age of identity we now find ourselves in, it is important to break gender stereotypes in small ways on a consistent basis. Enroll your son in a dance class and assign him domestic chores around the house. Sign your daughter up for flag football, or take her Go Kart racing. The more we can shift away from gender assigning behavior, the better chance our children have of embracing their uniqueness, and not falling into the kind of pack behavior that often corresponds with sexual assault in adolescence.

2. Stop Teaching Boys to be Chivalrous – This one was featured in the New York Times article, and was contributed by psychologist Peter Glick. We’re not talking about little acts of courtesy, that’s just being polite. What Glick is referring to is teaching our sons, even in subtle ways, that women are fragile, less competent, and need to be either pedestalized or protected. These teachings are not born out of malice, but a good-hearted attempt by many parents to make sure young women are looked out for. Glick argues, however, that it has a negative effect long-term. “It reinforces a sexual script in which a man takes charge where a women remains passive.” Rather, try and teach your sons that girls are strong, independent, and deserving of respect.

3. Tell Your Children to Trust Their Instincts – Leslie Morgan Steiner, parenting expert and author of “Crazy Love”, emphasized in a recent Washington’s Top News story, that women are taught not to trust our instincts, and, instead, “to place a very high premium on being polite and submissive, soft and feminine.” I agree with this whole heartedly, but believe it very much applies to boys as well. Boys are taught to be strong, to keep their feelings to themselves, and to exude machismo. Not only do the social scripts our children are handed in school, movies, on TV and even by relatives, tell them how they should think and feel, they are a dangerous combination for sexual misconduct. By telling your child to trust themselves and their gut feelings, you are taking that script away and replacing it with a blank page they can fill out for themselves.

4. Have “The Talk” and Have it Early – “It’s part of our job as parents to have these difficult conversations with our kids,” said Steiner, acknowledging the fact that those “difficult conversations” just got a whole lot more difficult for our generation. It isn’t enough anymore to sit your child down for a one-off explanation of the mechanics of sexual activity. We have to go deeper, and perhaps, using recent news stories is the best way to dive in. Sure, it may not be comfortable at first, but the more you encourage an open, honest dialogue in your home about social dynamics, sex, relationships, and sexual abuse, the greater reverence your child will have for the views you impart. A recent study published by the Society for Personality and Social Psychology revealed children almost always adopt their parents beliefs if they are imparted in a loving, empathetic way. And that even goes for kids who seem totally opposed to those views when first introduced. In addition, the earlier you can start having these conversations, the easier it will be to talk about sex when *gasp* it becomes particularly relevant in your child’s life.

5. Keep Talking – Okay, I know I’m hammering this point, but it’s the experts, not me! Steiner, Psychologist Christina Brown, who was interviewed for The New York Times, and Humberto Carolo, the executive director of White Ribbon, a men’s group to end violence against women, all agree that families must keep the conversation going. “Having an open dialogue will establish you as a credible source of information, and someone they can come to if they have questions or find themselves in troubling situations” said Steiner. And just to reinforce the point one more time, as Carolo said to the National Post, “Silence is not going to be the solution to this problem.” We all want to be the change we want to see in the world, right?

6. Share Your Own Experiences – This one can be particularly challenging, but both Carolo and Steiner agree that when a parent shares a personal story of sexual abuse, it can leave an indelible impression on their child. When parents speak to their kids about the sexual trauma they experienced or may have perpetrated and deeply regret, you make yourself accessible to your children, and allow them to learn from your strengths, your mistakes, and the trauma you have survived. This one may take some time, and that’s okay. Talking to your child about your personal experiences is not something you should attempt before you feel good and ready. Relax, take your time, and share when it feels right. The tides are changing, and as parents, we have a unique opportunity to move progress in the right direction, and benefit our children at the same time. No, creating an open dialogue, earning our children’s trust, and rewriting a social script that is literally as old as time is not going to be easy. But parents are, by definition, rockstars. We got this.

Olivia is a New York native and Los Angeles resident, currently working in the film and television industry. In addition to being a contributing writer for Tribeca Pediatrics, Briggs’ editorial and feature work has also been published in Working Mother Magazine and Care.com.